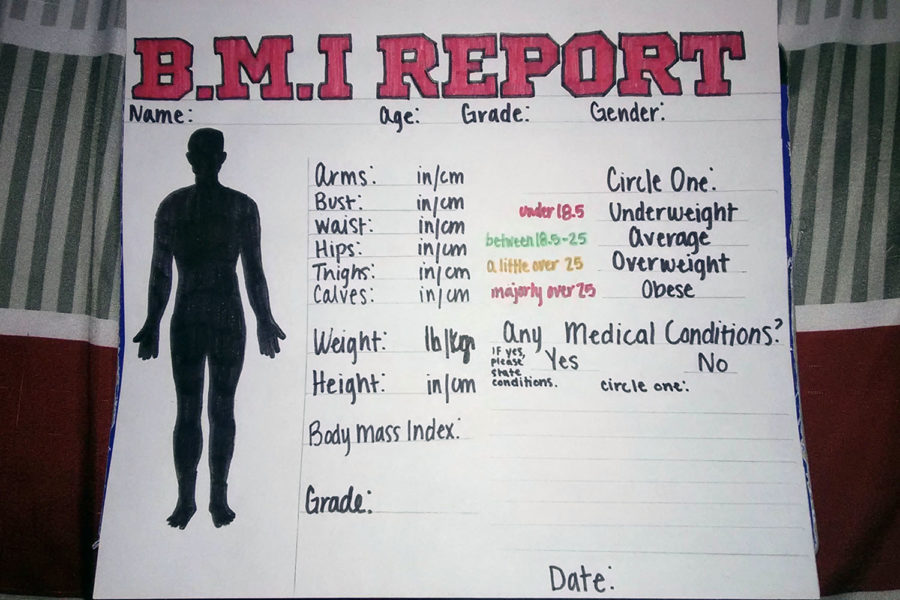 Child obesity is a public health problem in the United States. In the hopes of becoming a healthier nation, some schools in states such as Arkansas and California have given students ‘body’ report cards. A body report card monitors a child’s B.M.I in hopes of preventing unhealthy habits and increasing physical activity.

“I don’t think that’s a good idea considering most teenagers are already insecure about the way they look,” junior Sara Clinesmith said. “(Body reports) will just make them feel like their not good enough and they’ll start comparing theirs with other people’s. Not only that, but these report cards would make a student develop an eating disorder and could possibly trigger someone with an eating disorder. These report cards would just deteriorate a child’s confidence and mental health.”

In Japan, schools give out report cards on physical health for the children. The report cards are supposed to promote more physical activity and illustrate favorable health outcomes and behaviors. And since the obesity rate in Japan is only 3.5%, gaining weight would cause many to body shame you in Japan. In Japan, being skinny is a sign of being healthy; being larger than usual is a sign of laziness.

“I honestly don’t think it’s that bad of an idea,” senior Lacey Hamilton said. “However, I think it should only be for the people that are okay with getting monthly reports. I don’t think these reports should be a requirement because the school shouldn’t have to intervene with one’s physical health. The kids are here to learn, but getting a monthly report could help a student get to a weight goal they want to reach and could promote healthier habits if the students are willing to make a change. Students should have a choice on whether or not they want their body to be graded.”

In 2003, Arkansas tried stopping childhood obesity by enacting Act 1220. They would send home “B.M.I letters” to let the parents know their child needs to exercise more and eat according to portion size. However, the letters had little or no effect, especially on the teenagers. Parents and nutritionists said these letters were labeling their child into one weight range and caused them to have eating disorders.

“Although the body report cards have good intentions, not everybody has the same genetics or metabolism and some people will take the news more harsher than others,” Clinesmith said. “We just need to be more understanding and accepting of others.”