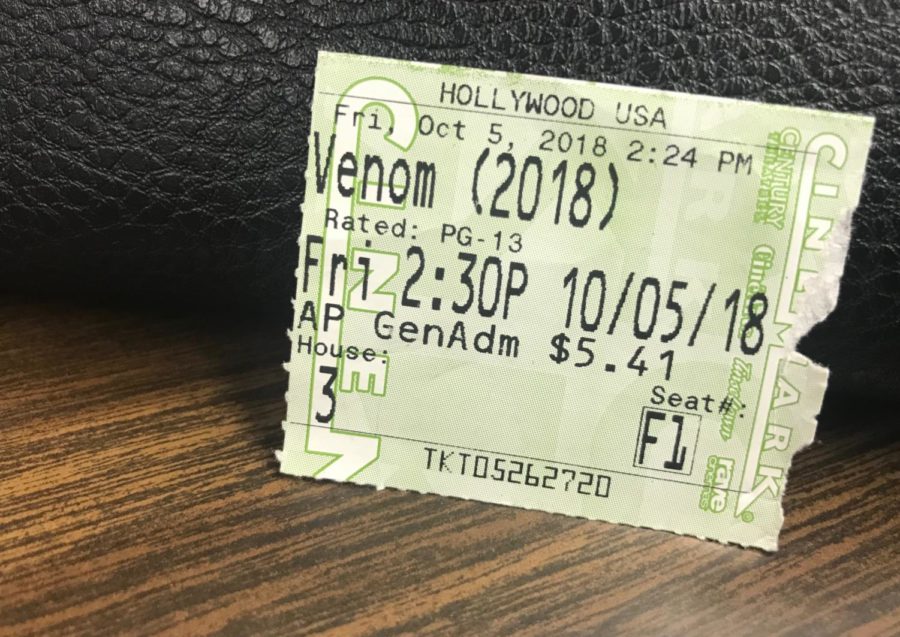 An alien substance crashes to Earth, effectively killing most human life aboard a Life Foundation spacecraft, the only survivor acting as a host. The ominous tone of the theater quickly changes to the bright camera roll of Eddie Brock’s career as a reporter. The montage of his life leads directly into the beginning of his story, a story that has been told in a different variation before.

The remake of the classic Tobey Maguire Spiderman 3 movie is of its own nature. The original tells the story of a symbiote attaching itself to Peter Parker, but due to copyright and a minor dust accident *Infinity War*, Sony found a new host for Venom. An unlikely pair made up of a recently unemployed, struggling alcoholic, Eddie Brock and an alien symbiote with an ulterior motive, both played and voiced by Tom Hardy, originally collected by The Life Foundation. The foundation says their purpose for the exploration was to find a cure for cancer, but as human experiment trials begin another scientist realizes the error in their ways.

The classic villain of Marvel Comics takes a liking to the human host which literally changes his mission on earth. The pair gets into plenty of sticky situations after they attach to each other, during which they both fight against one another. Venom’s appetite is humans, which causes some concerns for Eddie but they come to an agreement of only eating the bad guys.

The unfortunately untrue, in my opinion, reviews critics have posted don’t even touch base with the humor in this movie. A particular scene in the movie has Eddie Brock freaking out over a voice he hears, Venom’s voice, and jumps into a lobster tank at a fancy restaurant  The storyline is executed very well and left without any plot holes, while still maintaining good character arcs. What makes a good movie is a contribution the side characters have towards the plot, and without Eddie’s (ex)fiance, played by Michelle Williams, Venom probably wouldn’t have been able to survive long.

Overall the movie was a big hit, especially with all the confusion of copyright with Spiderman, and created a storyline worth going to see. This movie brings a new origin for the pair and introduces a new attribute to the ever-growing super-hero movie franchises.