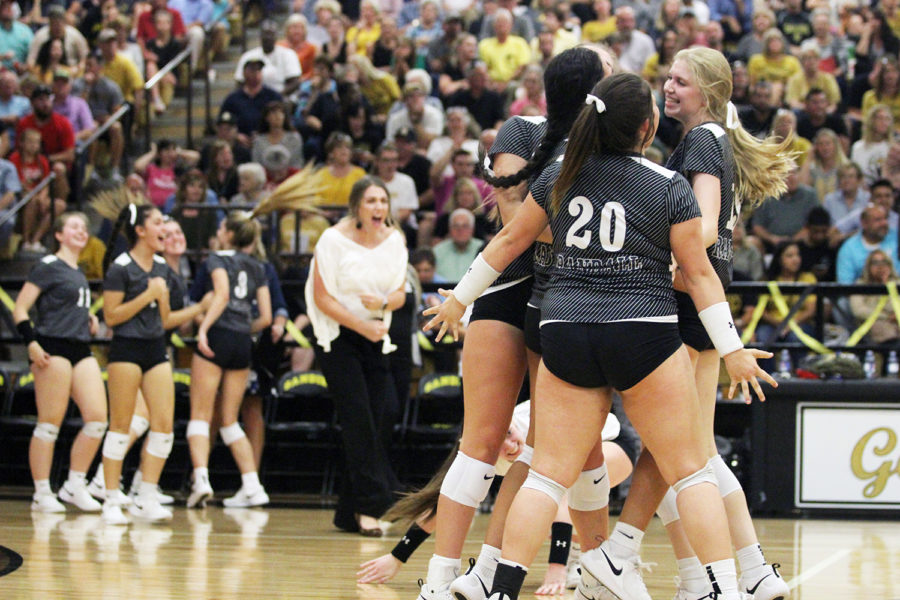 Randall Head Coach Haleigh Burns and the Raider team celebrate after scoring a point in the Sept. 24 Battle of Bell game against Amarillo High.

The anticipated battle between the Randall and Amarillo High volleyball teams came to a head last night in the Sandie gymnasium. High stakes were on the line, as the winner would take the lead in District 3-5A standings.

“(The win over Amarillo High) was really really good for us,” senior Zoe Parker said. “We haven’t played a really good team since preseason, so it was good to see that we were still able to compete well, and play hard against a talented team.”

“We’ve started off the season super strong, and the team is playing so good,” Parker said. “We’re playing at such a high level right now, and I really think we have a good chance of going back to state.”

Under the leadership of head coach Jason Culpepper, the Lady Raider team fell short of playing for the state championship by one game last season. The team finished third in state after a devastating loss to Kingwood Park High School in the semi-finals. Under the direction of new head coach, Haleigh Burns, this year’s Raider team has their sight set on nabbing the state title.

“Our team goal is to take first in district, and then obviously make it to the state tournament again, but not only make it but win state,” Burns said. “(Our team) got a taste of the state tournament last year. Just being there and playing at that level opened a lot of doors for these girls to go back and want to compete.”

As the team works toward their state goal, Burns said the girls are enjoying each other and their time on the court.

“We’re having fun,” Burns said. “They are enjoying the process right now, and just playing at a high level and enjoying just being apart of this team.”